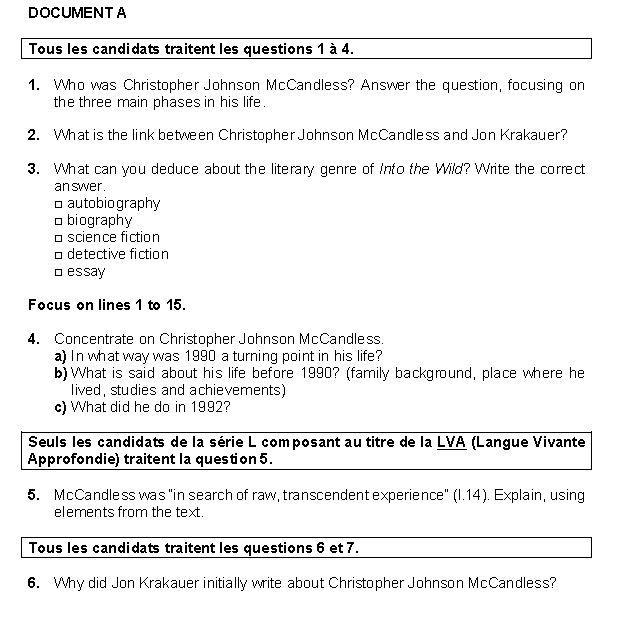 1. Who was Christopher Johnson Mc Candless?  Answer the question, focusing on three main phrases in his life.

He was a young American man who grew up in rich family on the East Coast. He studied at  Emory University. After his studies, he decided to invent himself a new life and go to Alaska.

2. What is the link between Christopher Johnson Mc Candless and Jon Krakauer?

3. What can you deduce about the literary genre of “Into the Wild”? Write the correct answer.

4. Concentrate on Christopher Johnson McCandless.
a) In what way was 1990 a turning point in his life?
After graduation from University, he changed his life completely: he “invented a new life for himself”, (l.12), “he dropped out of sight” (l.10), he disappeared and “he changed his name” (l.10). He gave his money to charities or burnt it and he left all his belongings behind, (l.10-12).

b) What is said about his life before 1990? (Family background, place where he lived, studies and achievements).

5. McCandless was “in search of raw transcendent experience” (l.14). Explain, using elements from the text.

6. Why did Jon Krakauer initially write about Christopher Johnson McCandless?
The editor of Outside magazine asked Jon Krakauer to report on the circumstances of McCandless’s death after his body was discovered.

7.  Jon Krakauer writes that he was “unwilling to let McCandless go” (l.20).
a) What does this statement reveal about the evolution of Jon Krakauer’s interest in McCandless? Quote the words he used to define his interest.
He became more and more involved and even obsessed with McCandless.
-“Fascination with McCandless” (l.17)
-“I was haunted by” (l.19)
-“With an interest that bordered on obsession” (l.22-23)

b) What causes this evolution? Find three reasons.
- McCandless’ tragic destiny (“the boy’s starvation” (l.21-22); “convoluted path that led to his death” (l 21)
- Wider issues the story raises (the appeal of “wilderness”, the appeal of “high-risk activities for young men”, “father and son relationship” (l.24-26)
- Identification with McCandless “unsettling parallels between events in his life and those in my own” (l. 20) “struck a personal note” (l.28-29)

8. “I won’t claim to be an impartial biographer”(l.28)
a) What does this comment show about Jon Krakauer’s intentions?
He wanted to be neutral and objective when writing the biography.

b) How does he feel about the result?
He is rather satisfied as he says “I have tried – and largely succeed, I think- to minimize my authorial presence (l.30-31)

c) Did he fully succeed?
No, he did only succeed partially as he warns the reader that he had to get emotionally involved: “Candless’s strange tale struck a personal note that made a dispassionate rendering of the tragedy impossible” (l.28-29).

9. How does the nature of his interest affect the objectivity of his narrative? Why? Justify your answer with three different ideas.
He is not an objective biographer  because:
- He adds his personal thoughts  on related subjects “I inevitably came to reflect on other, larger subjects as well” (l.23-24)
- He is emotionally involved: “Candless’s strange tale struck a personal note that made a dispassionate rendering of the tragedy impossible” (l.28-29).
- He includes elements from his own life “I interrupt McCandless’s story with fragments of a narrative drawn from my own youth” (l.31-32)