I will give you some suggestions to answer the first part of the paper: 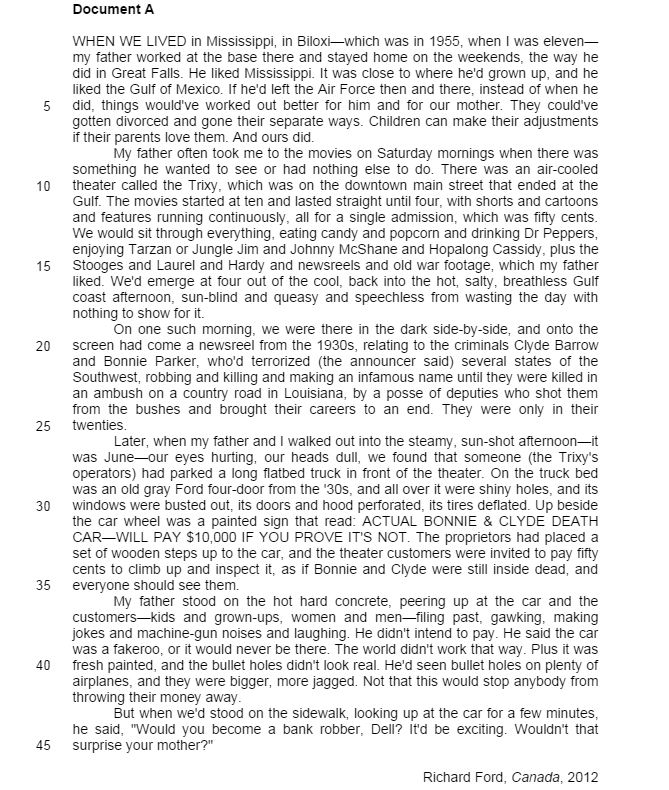 b) When and in which country does the scene take place?

“WHEN WE LIVED in Mississippi, in Biloxi—which was in 1955”

c) Where did the narrator and his parents live at that time?
“WHEN WE LIVED in Mississippi, in Biloxi”
In Mississipi, in Bilioxi

a) Why did the narrator’s father like that place?
“He liked Mississippi. It was close to where he’d grown up, and he liked the Gulf of Mexico.”

He had spent his childhood there. He liked the Gulf of Mexico area.

b) Where had he worked before that?
“If he’d left the Air Force then and there, instead of when he did…”

He had worked for the Air Force

c) What can you guess about his job?

“If he’d left the Air Force then and there…”

He worked for the army and travelled a lot.

a) Explain what “the Trixy” was and when the narrator and his father would go  there.
“My father often took me to the movies on Saturday mornings when there was something he wanted to see or had nothing else to do. There was an air-cooled theatre called the Trixy”
The Trixy was a cinema
They went on Saturday mornings

b) How long would they stay at “The Trixy”?
“The movies started at ten and lasted straight until four…we would sit through everything…”
They would stay from 10am till 4pm, that is to say 6 hours

c) Line 13: “We would sit through everything.” What is meant by “everything?”   Give at least four examples.
“ Tarzan or Jungle Jim and Johnny McShane and Hopalong Cassidy, plus the Stooges and Laurel and Hardy and newsreels and old war footage, which my father liked.”
Everything’ means all sorts of programs: series , documentaries or  the news. Here are some examples: 1.The Stooges  2.Laurel and Hardy  3.newsreels  4.old war footage, 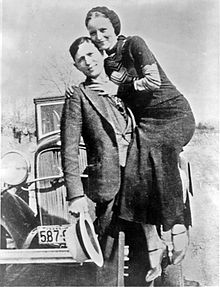 b) When and how did they die?
“ a newsreel from the 1930s” They died in the 1930’s
“they were killed in an ambush on a country road in Louisiana”
“by a posse of deputies who shot them from the bushes” They were shot by a group of police officers 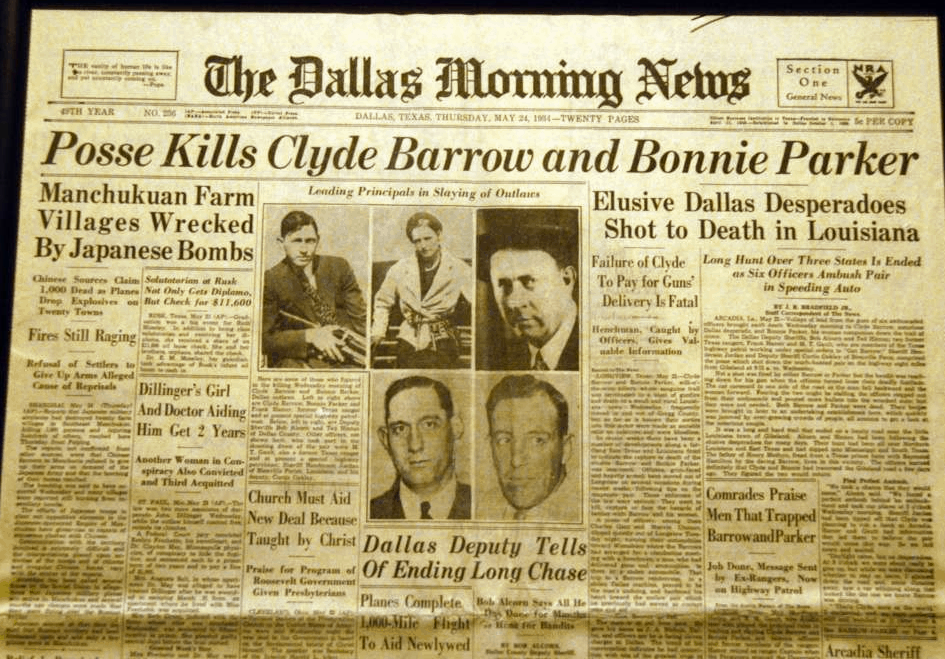 c) How old were they when they died?

What was the father’s attitude on seeing the sign that read: ACTUAL BONNIE & CLYDE DEATH CAR? (Lines 31-32)
“My father stood on the hot hard concrete, peering up at the car and the customers”
“He didn’t intend to pay. He said the car was a fakeroo”
The father found the car suspicious; he did not believe it was the real car! He said it was a fake. The word “actual” means “real”, “genuine”

5/ Read the text from line 16 to line 18.  Explain in your own words how father and son would feel at four o’clock. Explain why.

“We’d emerge at four out of the cool, back into the hot, salty, breathless Gulf coast afternoon, sun-blind and queasy and speechless from wasting the day with nothing to show for it.”
Father and son would feel a bit dozy, after moving from the cool cinema to the heat of the street. They would feel tired and spaced out. 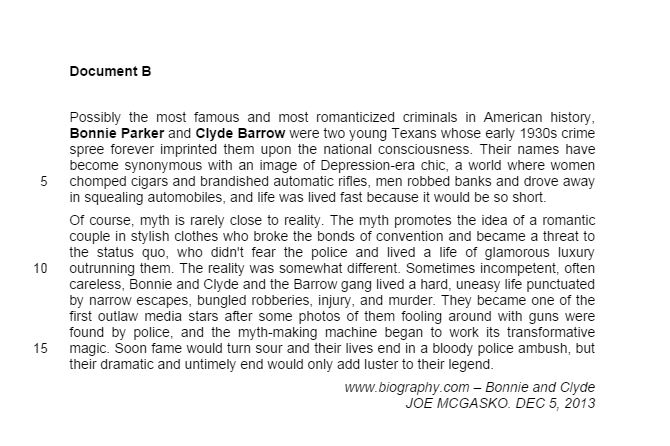 7/ How does the biographer show that Bonnie and Clyde’s lives were not as glamorous as their legend?
“Of course, myth is rarely close to reality….The reality was somewhat different. Sometimes incompetent, often 10 careless, Bonnie and Clyde and the Barrow gang lived a hard, uneasy life punctuated by narrow escapes, bungled robberies, injury, and murder.”

The author explains that reality is very different from the myth. According to the myth they did not fear the police and they lived a glamorous life but in reality they had a very hard, difficult and uneasy life. Their life was also very dangerous: on several occasions they came close to death.

8/ According to the biographer, what elements turned the lives of Bonnie and Clyde into a myth? Find at least four elements. (40 words)
“They became one of the first outlaw media stars after some photos of them fooling around with guns were found by police, and the myth-making machine began to work its transformative magic. Soon fame would turn sour and their lives end in a bloody police ambush, but their dramatic and untimely end would only add luster to their legend.”

Their lives became a myth because the police found some photos of them fooling around with guns. They became one of the first outlaw stars.
Their dramatic death, (being shot by the police) added to the myth.

DOCUMENTS A and B

9/ Document B, lines 15-16: “Soon fame would turn sour and their lives end in a bloody police ambush, but their dramatic and untimely end would only add lustre to their legend.”   Explain in your own words how this sentence finds its illustration in Document A. (40 words)

Bonnie’s & Clyde’s lives would end tragically as the police caught up with them, surrounded them and shot them. But the way they died only added to the myth as they they died young and in a tragic manner.
And in the Document A, it is said that: “they were killed in an ambush on a country road in Louisiana, by a posse of deputies who shot them from the bushes and brought their careers to an end. They were only in their twenties.”

10/ Would the father go to “The Trixy” to please his son? Justify your answer with a  quote.

From the text, we can tell that the father went to “The Trixy” to please himself and not to please his son. In the text, the son says: “My father often took me to the movies on Saturday mornings when there was something he wanted to see or had nothing else to do.”

11/ Lines 41-42: “Not that this would stop anybody from throwing their money away.”  Explain what the author implies in that sentence. (40 words)

The author implies that the public did not pay attention to his father’s comments, that they continued to pay their fifty cents to climb by the car and inspect it despite the fact his father could prove this was not Bonnie & Clyde’s genuine car.