Here are the questions
I will answer the Reading Comprehension questions  on Document A. I will give you guidelines for the answers in full sentences as it is asked in the exam. Of course, there are several ways of structuring your answers. 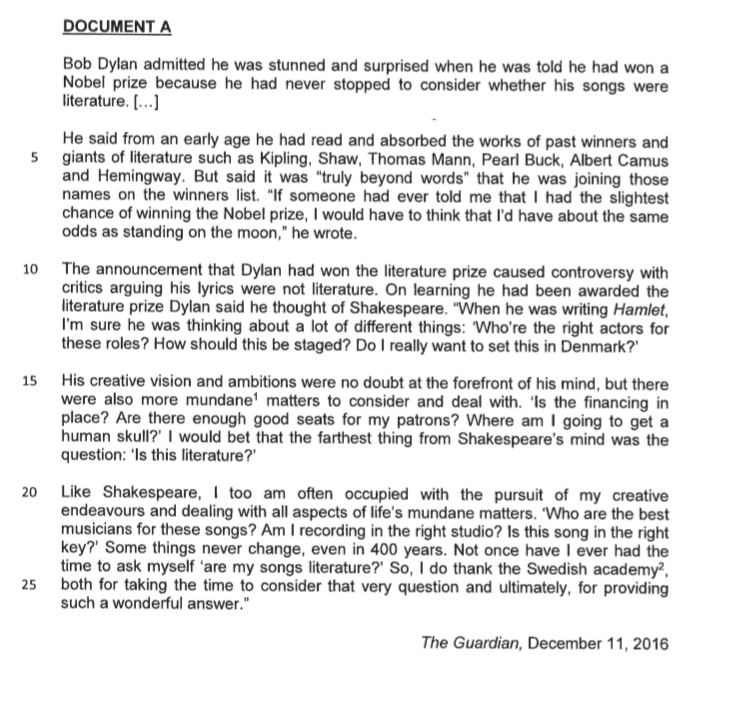 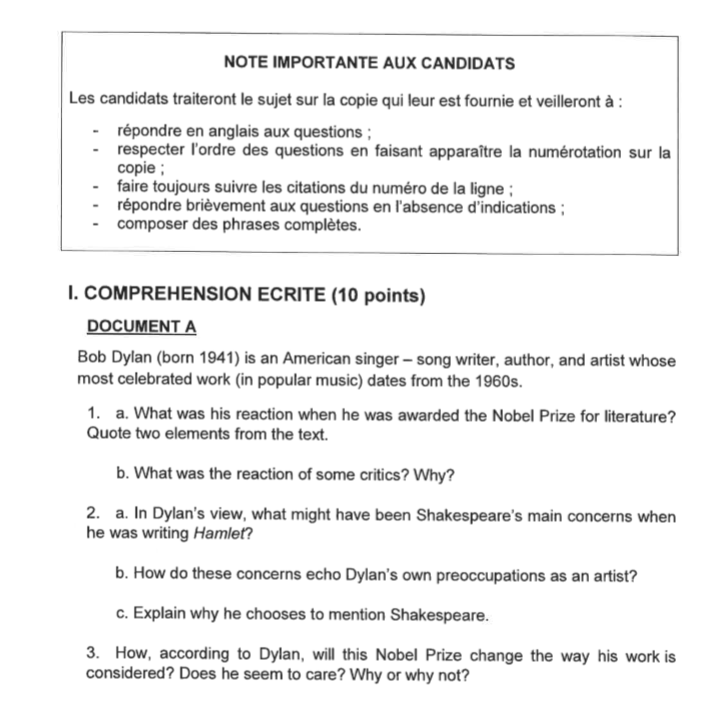 1. a. Bob Dylan was « stunned and surprised » (l1). He could not believe he was awarded the Nobel Prize for literature. He never thought about his songs being literature. He has always followed the works of previous Nobel Prize Winners like Hemmingway and Albert Camus.
Bob Dylan said it was “ truly beyond words” (l6) which means he was so shocked, he could not find words to express his surprise or his emotions.
He also compares his chances of winning the Nobel Prize with his chances of “standing on the moon”! (l8-9)

b. Some critics were unhappy and complaint that Bob Dylan’s work did not belong to literature: “with critics arguing that his lyrics were not literature” (l10-11)

2. a. According to Dylan, Shakespeare had very down to earth concerns when writing Hamlet. He had a lot of practical things to consider such as choosing the right actors for the parts, figuring out how the play should be put on stage, wondering which country to choose as a background of his story or even how to organise all the props:  “ when he was writing Hamlet, I am sure he was thinking about a lot of different things: ‘who’re the right actors for these roles? How should this be put on stage? Do I really want to set this in Denmark? (l12-14), "Where am I going to find a human skull?" (l17-18).

b.  Bob Dylan describes a similar situation for himself as an artist 400 years later.
Of course, he concentrates on the artistic side but he has to answer practical questions as did Shakespeare:  “ who are the best musicians for these songs? Am I recording in the right studio? Is this song in the right key? (l.21-22)

c.  He chooses to mention Shakespeare because he is known worldwide : Shakespeare is one of the most famous writers of all times and even he had other worries on his mind such as the practical organisation of the play before thinking about being recognised.

3. According to Dylan, this Nobel Prize will not change anything. He still will not ask himself whether his songs are literature or not.
He thanks the Swedish Academy for awarding the Nobel Prize to him. But he reacts in a very modest fashion and doesn’t seem to consider himself as more special than before: he simply says: “So, I do thank the Swedish academy both for taking the time to consider that very question and ultimately, for providing such a wonderful answer.” (l. 25-26)